The food chain indicates the process by which energy and essential nutrients are transmitted from one living being to another.

All living things on Earth depend on each other for subsistence, which is why there is talk of a food chain that varies according to the ecosystem, for example, there is the land food chain and the aquatic food chain. 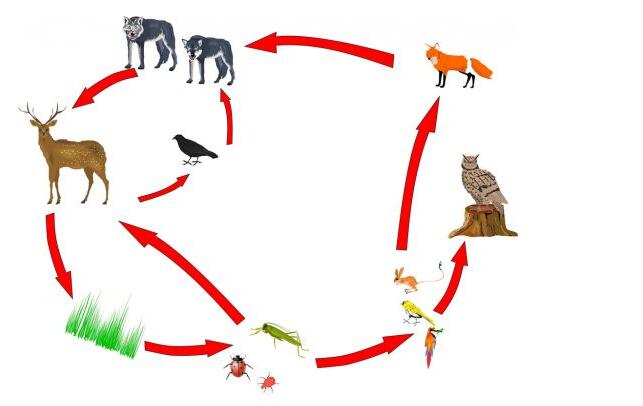 Links in the land food chain

The terrestrial food chain is made up of links that indicate how this process is carried out in general terms among living beings.

First link: it is composed of the producers or autotrophic organisms, which are those that transform the energy obtained through photosynthesis, water and soil into useful energy for the life of plants and vegetables.

Second link: at this level are consumers or heterotrophs, which are the organisms that feed on producers because they need their energy and nutrition to survive.

There are different types of consumers according to the order in which they are located in the food chain.

Third link: it is composed of decomposers, that is, bacteria and fungi, that live in the soil and feed on consumers once they have completed their life cycle and die. However, these decomposers are not tied to act only in this link, they can actually act in any of them.

Consequently, the energy and nutrients that once contributed the producing organisms, return to the ground, to the plants and the food chain is repeated again.

However, along the food chain, the transfer of energy and nutrients, which is linear, is losing strength as it passes from link, therefore, the producing organisms are the ones that provide the most benefits and to a lesser extent do the consumers and decomposers.

On the other hand, in the food chain it exists in any medium where life exists, therefore, all organisms are of the utmost importance even if they do not provide the same levels of energy and nutrition.

That is to say, when a link disappears, the entire food chain is completely altered, as a result, overpopulations of organisms that are consumed and that in turn are necessary for the feeding of others.

Therefore, it is necessary to take care and protect all the ecosystems that act on Earth, natural life works in a cyclic manner and, when its functioning system is affected, all living beings, plants, insects, bacteria and humans are affected. .

The marine food chain occurs in the seas and oceans. It differs from the terrestrial food chain in that the cycle is more extensive, some producers are microscopic, the producers are the fundamental food of predators, which are characterized by their large sizes.

The first link is composed of algae (plant) and phytoplankton (microscopic) that obtain energy through the sun.

The second link, consumers is composed of small or medium fish that get their nutrients from algae or plankton.

When these large predators die, as in the terrestrial food chain, their decomposed bodies will be the food of multiple bacteria, that is, the third link, which will allow their energy and nutrients to become food for the producing organisms.

These are some examples that demonstrate how the food chain works through different organisms.